Following a volatile start at the beginning of the month marked by a significant short-term pullback, the broad market was able to recover its losses and continue its ascent upwards with the S&P 500 reaching all-time highs by quarter’s end. The path to new highs masked a significant and volatile rotation between value and growth-oriented sectors driven by:

The last factor had a significantly negative impact on the financial sector specifically, as many large prime brokers took losses from offsides trades at over-levered hedge funds. In the wake of these deleveraging events, prime brokers can be expected to tighten margin requirements and risk management going forward. That said, the record high level of margin debt combined with historically low short interest is a sign investor sentiment is buoyant.

This point segues into a topic we want to highlight for April and the next six months thereafter. Much research has been done on seasonal effects within the stock market, and one of the most well-known anomalies is the significant difference in market return for the six-month period from November to April relative to the May to October period. The former tends to, on average, have far higher returns (leading to the familiar "Sell in May and Go Away" adage). Figure 1 illustrates this seasonality effect, with the five single best performing months of the year falling within the November-April period. The month of April is the most positive calendar month historically speaking. 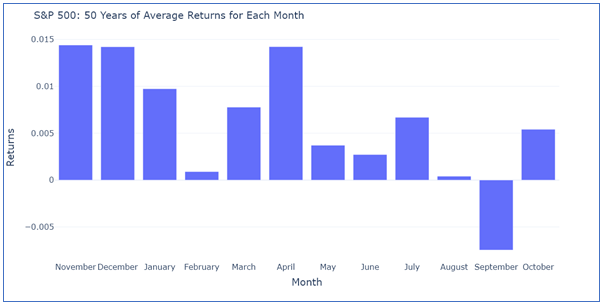 Figure 1. Average S&P 500 log returns for each month over the period from 1970 through the end of 2020.
Data sourced from Norgate Data. Calculations performed by KAM.

This positive seasonal bias over the near term is likely to be re-enforced by the continued COVID vaccine rollout, which bodes well for the economy and by association, better than expected corporate earnings. The improving backdrop, along with benign credit markets, is already reflected in the currently positive outlook of our models. We remain vigilant, however, given the fact we are approaching the aforementioned period of weak seasonal bias amid heightened investor enthusiasm for risk.

Nevertheless, we will rely on our models as to when to take action to preserve capital, just as we have so successfully done over the past 29 years.

Past performance is no guarantee of future results. The investment return and principal value of an investment in the Funds will fluctuate so that an investor’s shares, when redeemed, may be worth more or less than their original cost.

This website is for informational purposes only and should not be construed as a solicitation to buy or sell, or to invest in any investment product or strategy. Investing in securities markets involves risk and the degree of risk varies by the type of investment or strategy. For a complete list of the risks associated with each of our strategies, please review the Strategy Brochure and Factsheet. Materials such as blog posts, newsletters or commentary may contain information deemed to be correct and appropriate at a given time but may not reflect our current views or opinions due to changing market conditions. No information provided on this website should be viewed as, or used as a substitute for individualized investment advice.