By Kensington Asset Management Team - May 2022

Geopolitics: The economic fallout from Russia’s invasion of Ukraine continues to ripple across the globe. In apparent retaliation for NATO supplying armaments to Ukraine, Russia announced it would cut off gas supplies to Poland and Bulgaria. While the news was already anticipated by European markets, the tightening of global gas supplies was evident in domestic natural gas where prices spiked in April to 13-year highs. 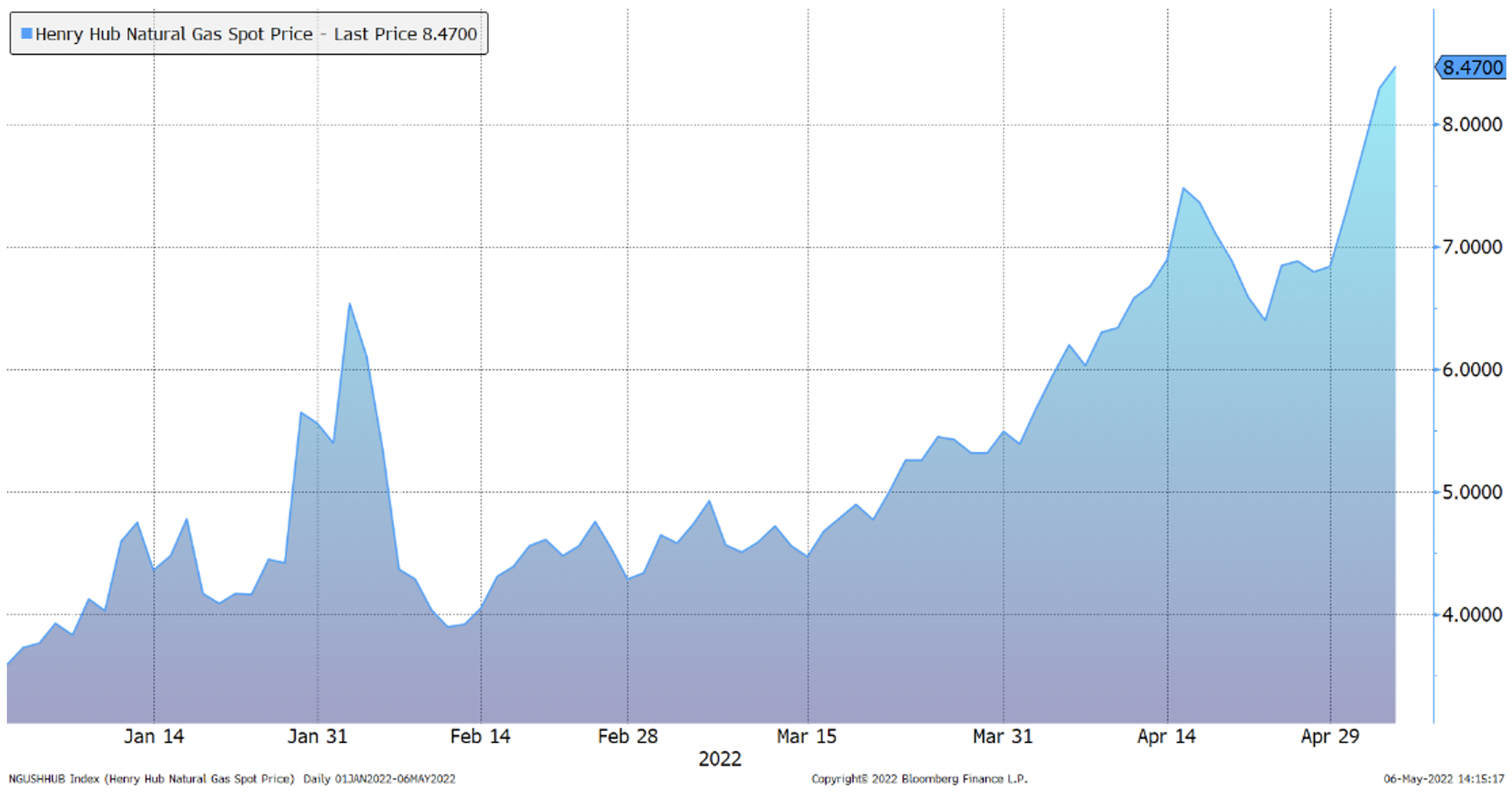 More broadly speaking, the risk of a recession in Europe from the war and accompanying Russia-induced energy supply shock remains high. The International Monetary Fund recently wrote, “The war will have severe economic consequences for Europe, having struck when the recovery from the pandemic was still incomplete. A protracted war would increase the number of refugees fleeing to Europe, compound supply-chain bottlenecks, add pressures to inflation, and deepen output losses.”

Compounding the current global growth slowdown is China’s Covid-19 zero tolerance policy and associated lockdown. Even if the country somehow manages to reach its GDP growth target of 5.5% this year, it will still represent the lowest rate of growth in the past 30 years. The associated supply bottleneck caused by China’s pandemic policy will put additional upward pressure on prices at the same time growth is slowing. 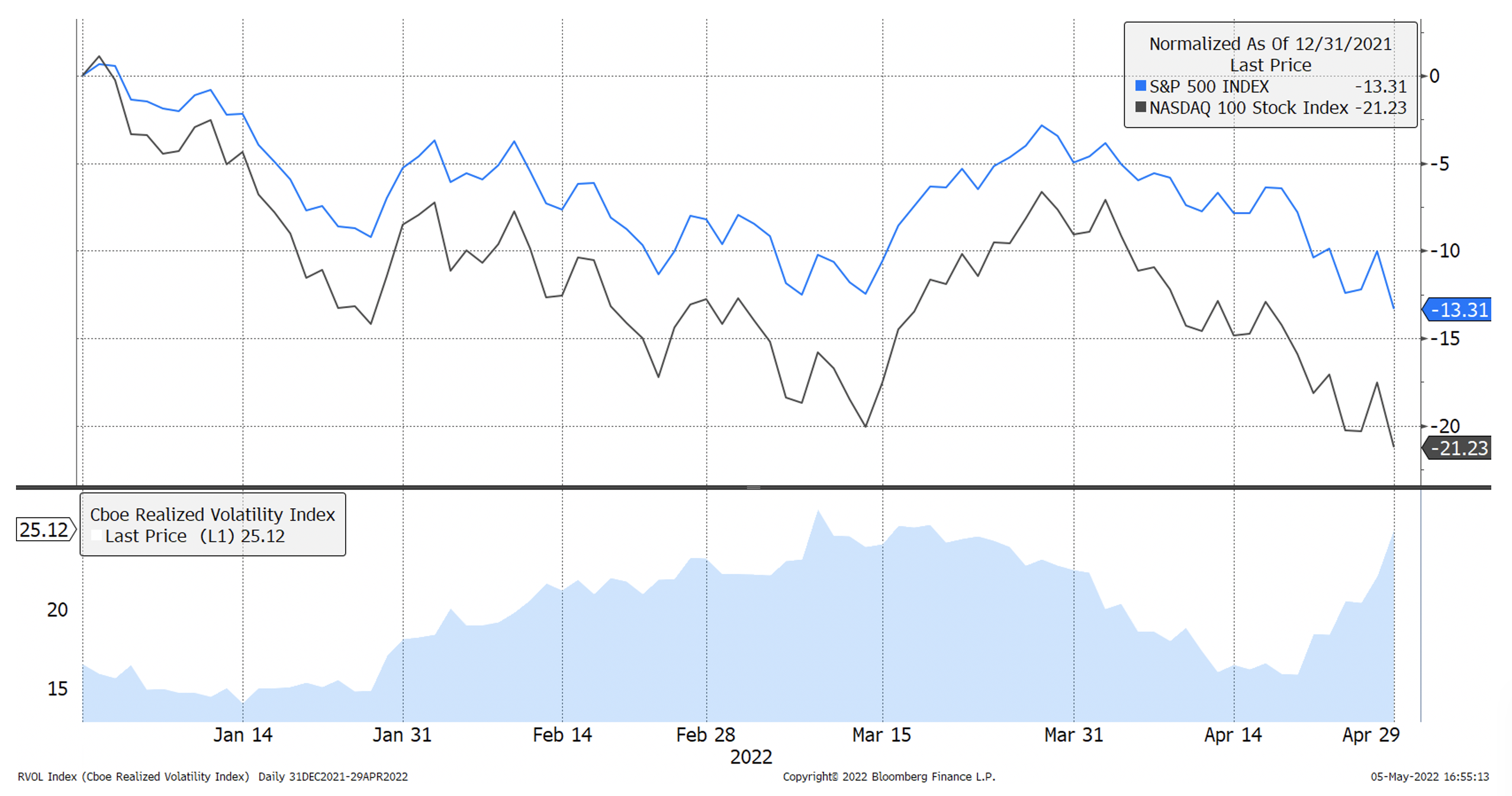 The increase in stock market volatility follows the volatility breakout in the bond market last month as we pointed out in March’s commentary. Investors continue to grapple with the severity and persistence of price inflation. Fears of a wage-price spiral increased after the release of the BLS’s employment cost index in late April which rose 1.4% in the first quarter and 4.5% year over year, the most in more than two decades. Even with these gains in compensation, workers’ real earnings fell, as the personal consumption expenditures price index (the Fed’s preferred gauge of inflation) jumped 6.6% compared to a year ago, the most since 1982.

None of this is good news, of course, and resulted in four straight weeks of equity outflows. The selling was prompted at least in part by margin calls, and it seems the fervor with which individuals have used borrowed money to buy stocks has broken, at least for now, with the total amount of margin in the system having rolled over. Sentiment, which already had been deeply negative, plummeted even further with the American Association of Individual Investors showing the lowest reading of bulls since March 2009.

Not all selling was retail driven, however, with institutions contributing to the sell-off. In particular, risk parity funds were sellers as both stocks and bonds fell during the month. The widely used 60-40 benchmark portfolio (60% stocks/40% bonds) that has outperformed most active managers since the long-term secular bull market began in 1982 fell -7.07% in April and is now down -12.26% for the year. Bonds have historically acted as an excellent diversifier in long-term portfolios over the past four decades. This has mainly been a result of the long-term decline in interest rates and its corollary inflation over that period. Now that inflation is once again rearing its ugly head, investors can no longer rely on bonds to play that role.

The rise in prices mentioned above threatens corporate profit margins, which have recently been at multi-decade highs. In fact, in each quarter of 2021, S&P 500 profit margins exceeded 13%, a feat that previously had only occurred in one quarter in the past 70 years. To date, corporations have been able to offset rising input costs by raising prices and cost efficiencies. If inflation proves to be more than transitory, however, Q4 2021 may prove to be the peak in margins for this cycle. 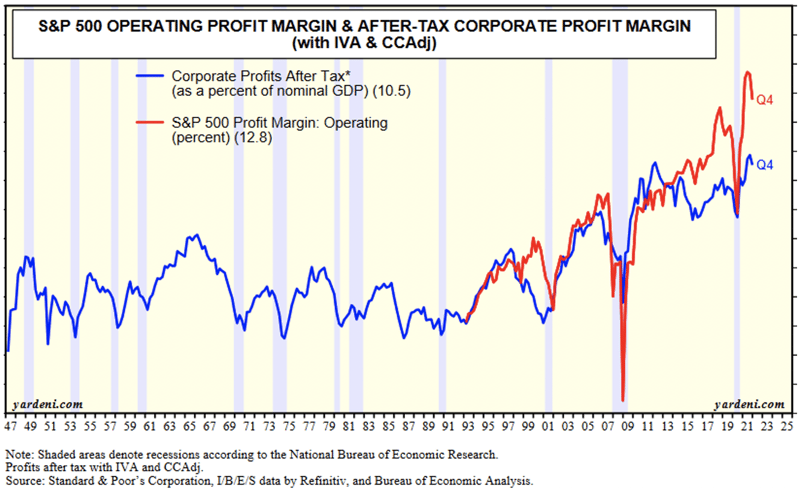 Another hurdle facing the stock market is seasonality. In addition to the historical tendency for the market to be relatively weaker in the May to October period, this year is also a mid-term election year. As can be seen in the graph below, this period has notably underperformed on both a relative and absolute basis. 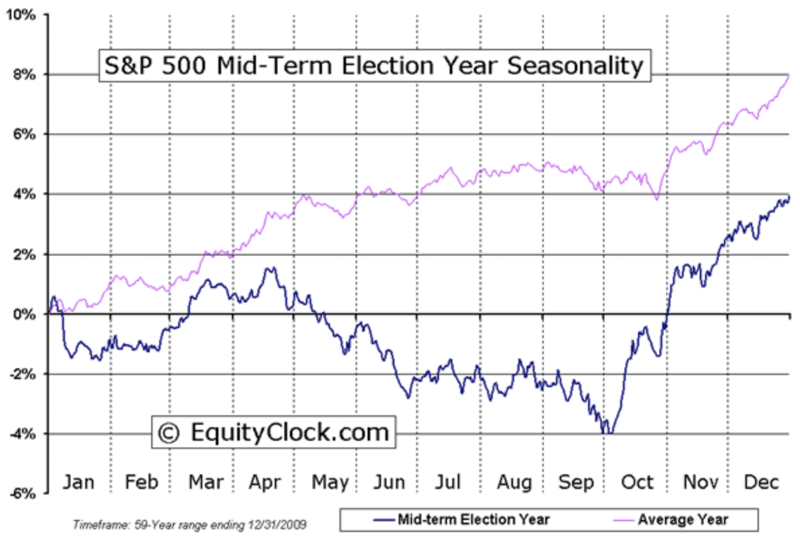 The outlook is not uniformly negative as corporate profits remain robust and corporate demand for shares remains extremely strong. In a recent report, Goldman Sachs estimated buybacks may total as much as $1 trillion in 2022, continuing the pattern we have seen over the past several years.

Fixed Income: The carnage in fixed income markets continued in April with the S&P U.S. Treasury Bond Current 10-Year Total Return Index declining -4.73%. The 56-basis point jump in yield in April was the largest increase since March 2009, when the economy was just starting to recover from the greatest financial crisis in a generation. For the year, the index has lost -11.16%. The Treasury market was not the only fixed-income sector to come under pressure. Investment grade corporates fared even worse, falling -5.47% in April and -12.73% for the year.

Investors remained fixated on inflation reports that showed significant pricing pressure throughout the economy (although they may be peaking soon due to base effects). In addition, the Federal Reserve’s goal of bringing inflation back down to the neutral rate of about 2% clearly has changed the price level at which markets will clear. With the prior largest buyer of bonds (the Fed) now withdrawing liquidity from the system, at least until price pressures subside, financial conditions have rapidly tightened.

Some of the extreme volatility in bond prices can also be ascribed to structural issues as dealers exhibit greater reluctance to hold inventory. In the past, Wall Street banks have been much more willing to make markets and take on principal risk. They are less willing to do so now, both for regulatory reasons and the deteriorating fundamental outlook. As a result, market liquidity has dropped significantly, prompting wide swings in the bid-ask spread.

Monetary Policy and the Federal Reserve: As expected, the Fed announced a hike in the Fed Funds rate of 50 bps and an initial shrinking of its balance sheet by $47.5M monthly starting June 1st (which will increase to $95M three months later). Chairman Powell indicated his base case is for hikes of 50 bps each at the next two FOMC meetings, albeit data dependent.

With the course of Fed tightening now known, attention will turn to the pace of both economic growth and price pressures. Close attention will be paid to the shape of the yield curve and its potential inversion (i.e., short-term rates exceeding long-term rates) as well as credit spreads. Yield inversion and widening spreads have historically acted as precursors to recession (albeit with a variable time lag that historically has extended out as much as a year or more).

At the same time, consumer balance sheets remain quite healthy, wage increases have been robust on average, and unemployment remains at cyclical lows. Chairman Powell is hoping these positives will be sufficient to ensure a soft landing for the economy, similar to what took place in 1984 and 1994, when the Fed tightened monetary policy, lowered inflation, and saw no reduction in growth.

Dynamic Growth: The stock market reversed course mid-month and we exited our long position as a result. While our Model has historically been successful in avoiding such whipsaws, there will be times when we will enter and exit trades more quickly than usual. Dynamic Growth is driven by a quantitative model that dispassionately measures supply and demand using price. The signals the Model generates are affected by how stable those price indicators are. Although we have built the Model to avoid flip-flopping as occurred in April, at times of extreme volatility it is possible for a buy signal to quickly reverse. Historically, this tends to occur more frequently when markets are in a downward trend as is the case now.

Managed Income: The corporate high yield market has been battered this year with the Bloomberg Barclays High Yield index down -8.55% to date. Fortunately, we have avoided the bulk of the decline having shifted to a Risk-Off mode in late November and are now parked largely in cash. It is in this type of high volatility environment that our tactical investing style shows its mettle, just as it did in the great financial crisis of 2008 and March 2020.

Since fixed income markets are likely to be prone to price swings in the months ahead as the Fed attempts to orchestrate a soft landing in the economy, Managed Income’s long history of preserving capital in volatile times is particularly reassuring to our clients. We remain vigilant and will re-enter when market conditions warrant doing so as dictated by our Model, which has successfully navigated the ups and downs of the high yield bond market for over 30 years.

In summary, it’s apparent that investors are faced with challenges that have not been seen for many years. This brings into question the wisdom of relying exclusively on more traditional methods of portfolio management, basically comprised of a “Buy and Hold” approach. The merits of such an approach rely largely on the historically low (but not assured) negative correlation between stocks and government bonds at times of duress, using a stock/bond balance to mitigate volatility and downside risk. Kensington’s active tactical approach was designed to deal with uncertain markets when such relationships may be changing and should be given serious consideration to augment more traditional investment strategies.

Weathering the Ups and Downs in Volatile Markets

Past performance is no guarantee of future results. The investment return and principal value of an investment in the Funds will fluctuate so that an investor’s shares, when redeemed, may be worth more or less than their original cost.