Geopolitics: While investors continue to focus on the conflagration in Ukraine, their attention shifted in June to the potential economic fallout from the growth slowdown taking hold globally. This was no more evident than in the price behavior of industrial commodity prices, which declined precipitously in the last half of the month. Economic bellwethers, copper and iron ore, both fell steeply, declining -20% and -18% respectively. Even supply-constrained oil prices fell, dropping over -5% for the month.

In Europe, the state of energy supplies, and in particular natural gas, continues to worsen. Natural gas prices have increased seven-fold since the beginning of 2021 and Russia has threatened to further reduce supplies to the EU. At the same time, Norwegian oil and gas workers initiated an industrial action (strike) accentuating the crisis. Germany’s Minister for Economic Affairs and Climate Action declared that if supplies continued to fall and prices rise, it could result in a ”Lehman Brothers moment” with potentially catastrophic economic repercussions.

Seasonally, June has historically been the worst performing month in a midterm year (see chart above) and this year has been no different. The poor performance can be attributed to further compression in price-earnings multiples driven by higher interest rates / inflation. As can be seen in the chart below, the P/E ratio for the S&P 500 index has fallen from a high of 23 at the January top to 16 currently, a 30% decline, a compression never before seen in the past 70 years. 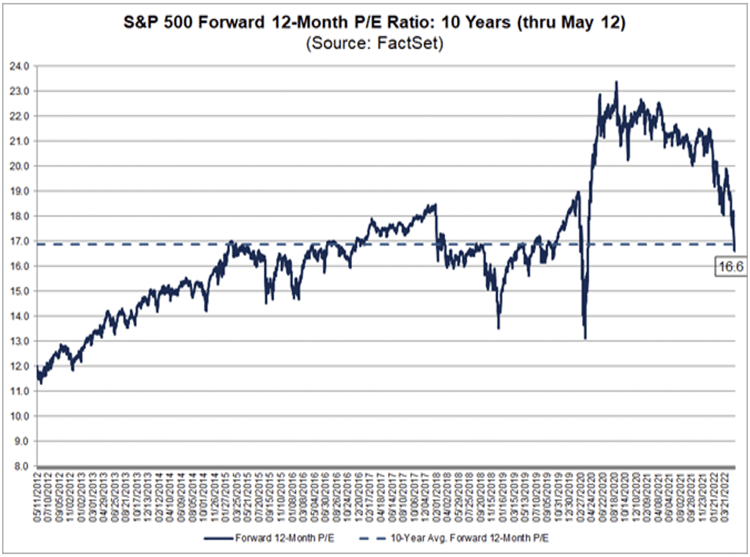 With the risk free 10-year rate yielding ~3%, equity valuations, at least by this measure, now appear quite reasonable, perhaps even undervalued (see chart below). With a worldwide economic slowdown on the horizon, inflationary pressures may recede and with them interest rates, suggesting this leg of the bear market (driven by P/E ratio compression) is drawing to a close. The risk of a next leg down, should it occur, will likely be driven primarily by lower-than-expected corporate earnings. Investor attention is now fixed on Q2 earnings releases, which will begin in earnest in mid-July.

Fixed Income: There was wide disparity in performance among bond indices in June, indicating increasing investor uncertainty as to the future direction of economic growth. This can be seen in the sector return profile: the Bloomberg U.S. Treasuries Index returned -0.88%, while the Bloomberg Investment Grade Corporate Index retreated -2.80%. In contrast, the Bloomberg High Yield Index fell -6.73% in the month and is now down -14.19% for the year.

Mortgage-backed securities also fell during the month as mortgage rates continued to back up, with the S&P U.S. Mortgage Backed Securities Index down -1.43% for the month and -8.31% year to date. 30-year fixed rate mortgages peaked at 5.65%, the highest borrowing rate since November 2008. In response, housing permits for single family homes, a leading indicator of home construction activity, fell 7.0% month over month while housing starts dropped 14.4% to a 13-month low.

In aggregate, bonds have performed miserably this year, with the Bloomberg Aggregate Bond Index down -10.35%, the worst ever start for the index, which began in 1973.

The stress in the lower grade sectors of the market are evident as well. As seen in the chart below, junk bond issuance has tumbled 75% this year as investor demand has all but dried up. Coinciding with this we have seen yields jump, with yield to worst reaching 8.89% by month’s end. 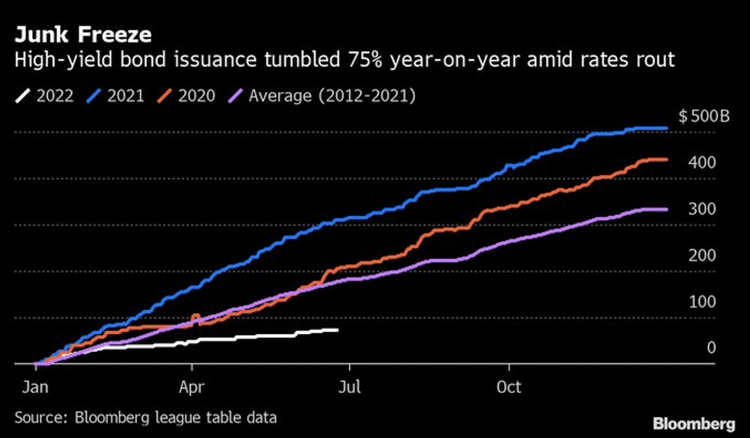 The high yields now available may offer opportunity depending on the depth of the oncoming slowdown. As shown in the chart below, when starting yields are between 8% and 9%, the distribution of returns are impressively skewed to the right. GMO pointed out in a recent article that the default rate could jump to 12% over the next year before capital would be impaired. With the current default rate at 1% and expected to rise to 3% over the coming year, there appears to be a significant margin of safety. 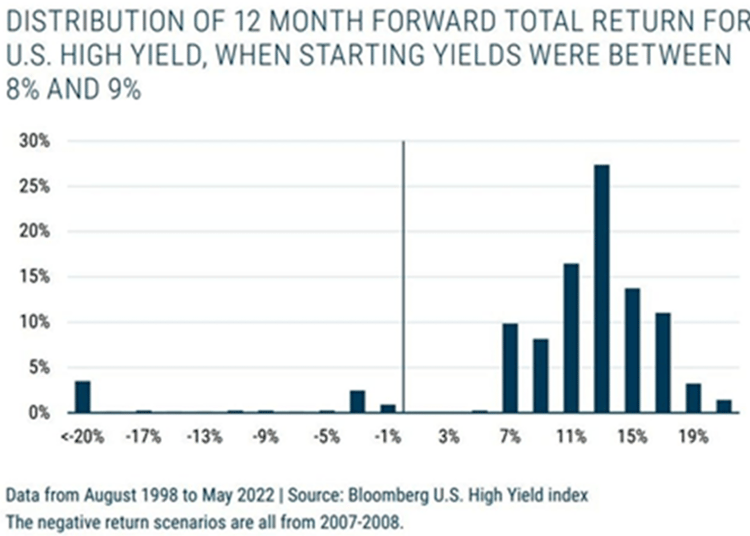 Monetary Policy and the Federal Reserve: The Fed continues its singular focus on bringing inflation back down to 2%, even as leading economic indicators suggest a slowdown is fast approaching. Chairman Powell has made a point of the Fed making sure long-term inflation expectations stay well-anchored around the 2 - 3% level. The University of Michigan Consumer Sentiment Survey this month indicated survey recipients’ longer-term expectations of rising inflation continued to increase (albeit slowly) with the five-year survey now at 3.1%. Near-term expectations were not nearly so benign with responders expecting inflation to average 5.3% over the next twelve months, the highest reading in 40 years.

Turning to the FOMC (“Federal Open Market Committee”) meeting in July, expectations are for another 75 basis point increase, although that could shift depending on the strength of the June non-farm payrolls report and the CPI (“Consumer Price Index”) / ­­­­­­PCE (“Personal Consumption Expenditure”) releases due mid-month. Signs of a budding wage-price spiral would likely force the Fed to take even more aggressive steps to slow the economy.

The Fed’s monetary tools are less than ideal in dealing with inflation that is principally being driven by a complex set of demand and supply variables, most of which are beyond the Fed’s control. While ultimately the Fed can bring about lower prices, it will likely be at the cost of a recession, the severity of which is still to be determined.

Managed Income Strategy: The Managed Income Strategy entered a Risk-On posture in late May for the first time in 2022 as both U.S. Treasury and higher yielding bond yields fell sharply, resulting in a positive price trend for the category. Unfortunately, this trend quickly reversed in June, and our model moved back to a Risk-Off posture shortly thereafter. High yield bond spreads – the yield premia investors demand to invest in higher risk bonds – have continued to widen, with the ICE BofA US High Yield Index Option-Adjusted Spread widening to 5.97 at the end of June, a 2022 high. This recent increase in yields could set up another opportunity for entry, which we will continue to monitor.

Dynamic Growth Strategy: Our Dynamic Growth Strategy also entered a Risk-On trade in late May, the third such long trade this year. As was the case with the prior two buy signals, our late May entry was predicated on a counter trend signal in which the model determined the market had been oversold and was likely to revert. As with the previous two buys, an initial gain quickly evaporated when the market rolled over and we exited shortly thereafter. Bear market trading environments can be especially treacherous, but do offer significant pockets of opportunity to profit from price swings.

In the case of both Managed Income and Dynamic Growth, these unprofitable late May trades, while disappointing, do occur from time to time in trend / countertrend strategies such as ours, particularly in highly volatile markets. While 2022 has proven to be a challenging year, we are encouraged by our performance to date relative to our strategy performance benchmarks. We are optimistic that there will be additional opportunities for gains, especially as we approach the terminal phase of this bear market.

Kensington Asset Management’s primary mission in bear markets is to preserve our clients’ capital, while taking advantage of trading opportunities when they arise, which we have done successfully over the past three decades. It is in environments such as the current one that tactical strategies like ours truly stand out and we’re confident they will continue do so in the months and years ahead.